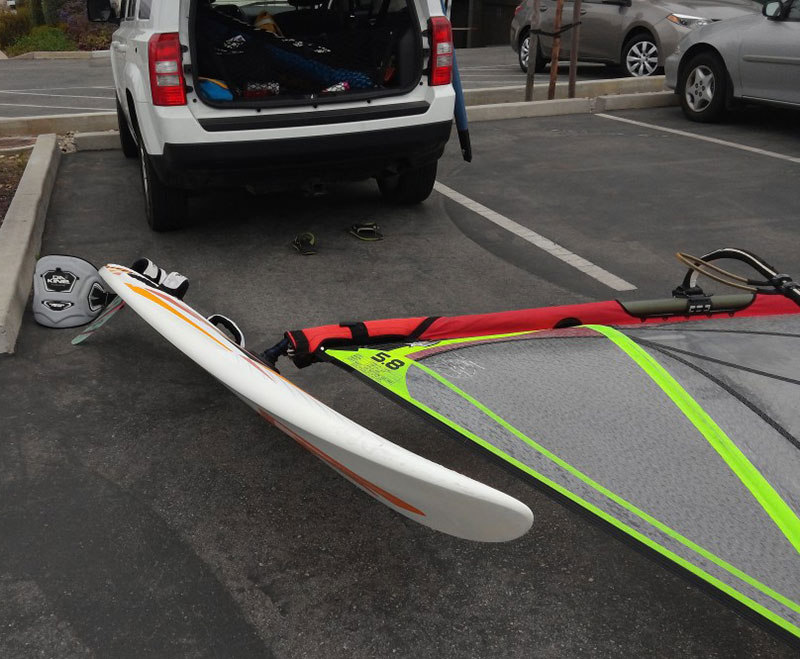 If you need a board for 35-50kph wind the Fanatic Hawk will do nicely.  I wouldn’t call it loose. Jibing takes total commitment.  The tail is narrow and somewhat flat. The concave runs nose to tail and loses hollowness toward the tail.

Not really an easy board to sail. The conditions you would sail a 97 liter board are not the same as a floaty 120lt. Not to say that an intermediate wouldn’t love it but to get the most out of this shape you need to be fully powered up and ripping.  Shines with a 5.5 and a 26-28 freeride fin.  // Bill Hilow 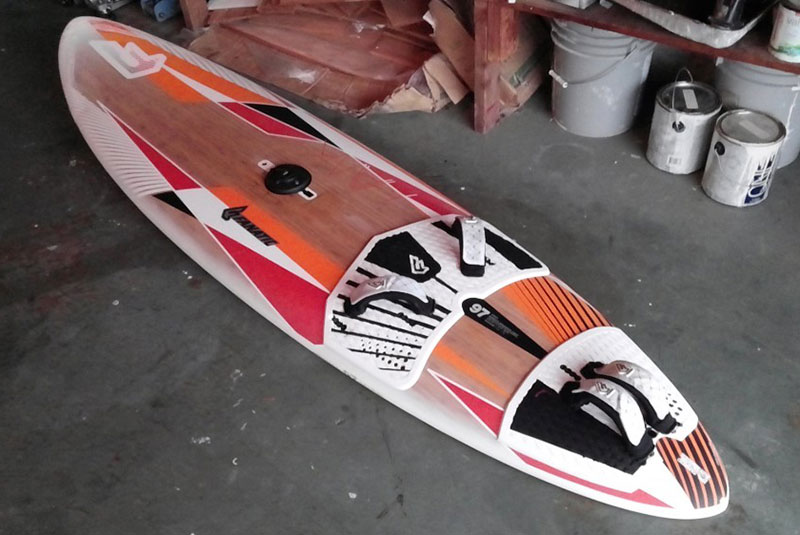 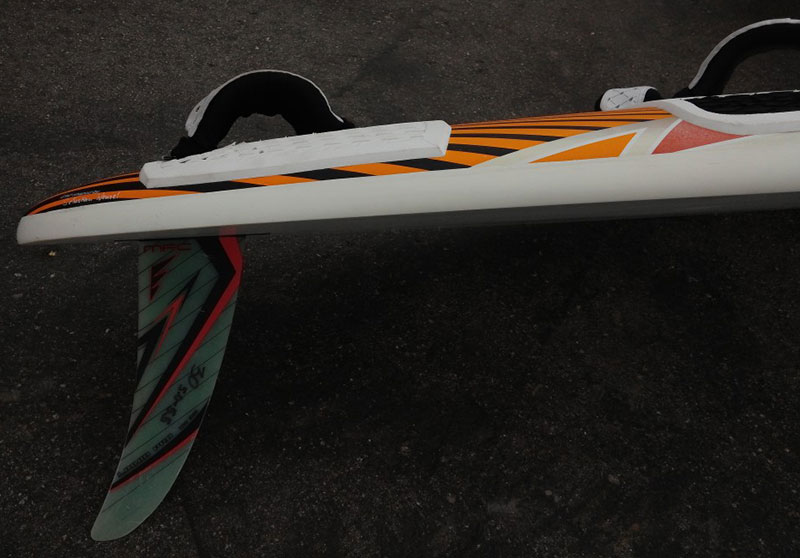 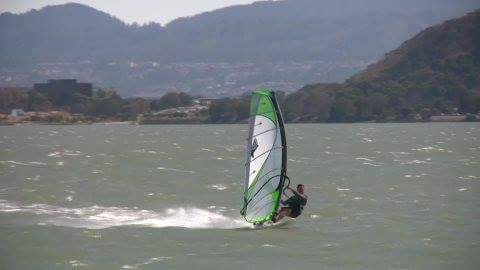 In over 20 years of sailing in San Fransisco this is the preeminent freeride rocket. My main board in any conditions including open ocean blasting. Not since the Mistral Electron of yore has there been another board with this competence and versatility. It gobbles chop, lofts airs like a 88lt.

Takes commitment to ride. Basically has two gears. Waterstart or full speed. There really isn’t any in-between. As soon as you step on the back strap the board jumps and keeps accelerating until you hit top speed or stuff it.  I sail most often with a 5.5 and and 26cm FinWorks Wave Blade. All carbon.

Top speed is of course limited to fin, sail and bottom shape.  Jibing takes commitment and a flat area to initiate. I try to scrub speed by sailing a bit upwind then overcommitting to the lee rail. The board is short and wide but never plows.  Upwind performance better than average, off wind performance it’s forte’.  If you’re fully powered in chop or big rolling swell no freestyler will challenge you. I guarantee it. Exciting ride with slippery feel. // Bill Hilow 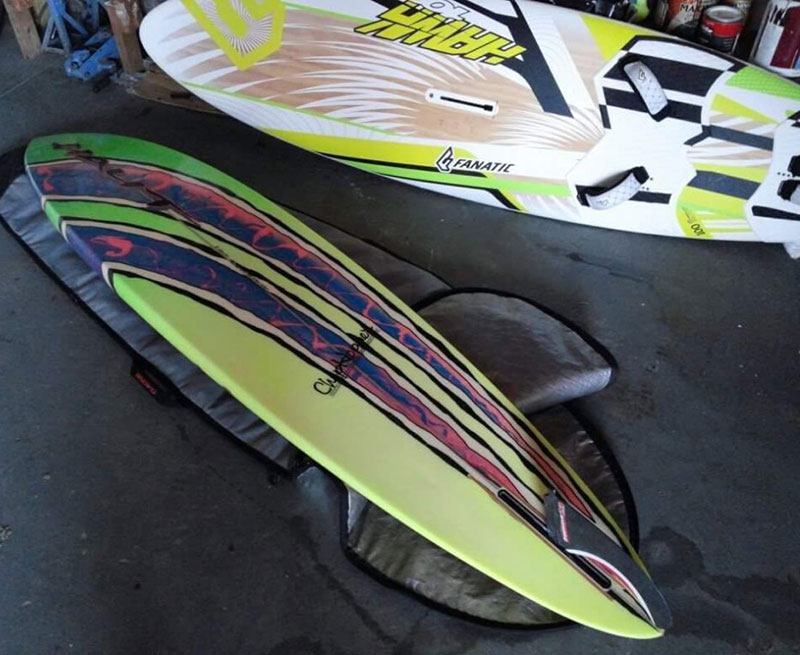 Fanatic Hawk range remains unchanged for 2012. Why change a successful concept. The shaper Sebastian Wenzel gives us his thoughts behind the decision (video below).

Fanatic Hawk 120 was the fastest of the tested freeride boards 2010, at the same time it scored fairly well for its early planing skills, only the Tabou Rocket 125 got higher scores than the Fanatic Hawk.
Read the test: Fanatic Hawk 120 – Test 2010 and 2011

Fanatic Hawk 120 is considered to be the fastest boards in this category. At the same time the Fanatic Hawk requires a little bit more experienced sailor when it comes to gybing.

Despite that it stands clear that the Fanatic Hawk is really really fast and one of the most exiting windsurfing boards in this category.

Have look at the awesome Fanatic Ray.

The Fanatic Hawks are fully CAD designed, analysed and shaped on the CNC shaping machine. We re-tuned the existing, super-fast Fanatic Hawk rocker line and carefully analysed the outline curves to support the overall performance.

The Fanatic Hawk 120 is the choice for riders wanting a really fast board that can still rip through jibes. No matter how hard you push this board the nose stays put, and like a true race board, the Fanatic Hawk remains steady the harder you push across chop.

The inboard footstrap position on the Fanatic Hawk is not as comfortable and can be out—accelerated leaving you unbalanced and finding it difficult to head upwind. An aftermarket fin is a must for those looking to push the Fanatic Hawk to its slalom limits.

A serious amount of commitment is required to engage the rail with a modern over-sheeted jibe. When done correctly it makes for a tighter than expected jibe and a huge smile on your face.  As a freeride board the Fanatic Hawk is as fast as they get and we would strongly recommend the Fanatic Hawk to anyone new to racing.

The Fanatic Hawk feels very light, lively and almost frictionless under your feet. It really does feel lightning quick and rightly earns the title of ‘fastest board on test’. The Fanatic Hawk actually gives a sensation of speed that none of the other boards come close to matching.

The outboard foot position on the Fanatic Hawk is very comfortable and felt perfectly balanced at speed.

In the corners the Fanatic Hawk can crank a tight gybe as well as anything here. If you go at it with full commitment you’ll come out with a big smile on your face. If you’re a bit more hesitant in the gybe you’ll find the Fanatic Hawk a little unsettled underfoot, and it doesn’t hold its line as well as some others unless driven hard.

The Fanatic Hawk is an absolute rocketship, offering unquestionably the most exciting ride of this group, but be prepared for a white knuckle ride at the top end.

Other windsurfing boards in the same test: