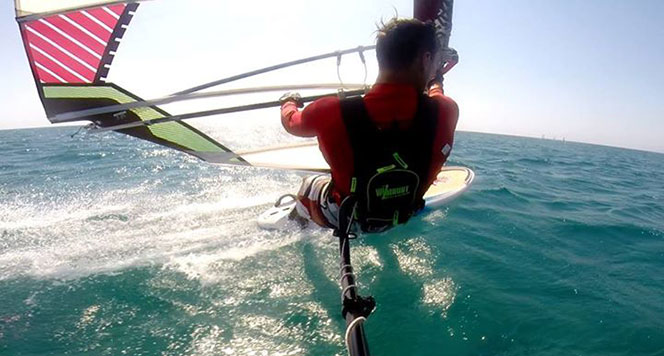 Last year when we visited the windsurfing PRO Center in Ialyssos, Rhodos – Greece we had the opportunity to test several sail brands side by side. Even though the sail and board brands are strictly tied to each other, also within the PRO Center, we were allowed to jump between the brands which was highly appreciated.

During our stay we used the following windsurfing sail and board combos:

North Sails & Boardtests – A match made in heaven?

We were focusing on the freeride and freerace equipment. Summarising the week we ended up loving the NeilPryde for its smooth power/performance and their really nice carbon boms. We also really liked the powerful grunty feel of the Gaastra sails delivered together with the Tabou Freeride and Freerace boards. When it came to North sails however we didn’t became best friends. The North Sails freeride and freerace lines felt somewhat powerless when it came to low end performance and the wave lines felt very on and off,  compared to the other sail brands in the same sizes.
Since the staff at the PRO center, interesting enough, often ended up using North Sails we had a discussion with them about our feelings we had about the North sails and the conclusion was that, of course, it’s all about personal preferences, i.e. what type of sail characteristics you prefer.

Prasonisi 2015 – We ended up with Starboard and… North Sails

This year we visited Prasonisi, Rhodos – Greece, which was a totally different story. Three windsurfing rentals to choose from with one board- and sail brand setup each (with one exception). We discussed back and forth and we ended up with Starboard and… North Sails – e_type.

During the week we learned to like the North Sails e_type, however we still think that the e_type lacks a bit of low end. For some reason the guys at the board rental by default set the sail with full outhaul, flattening the sail out, in our opinion an efficient way to kill the sail. Letting the outhaul of fixed some of the low end issues.

However, fully powered the Starboard Futura / North sails combo was as fast as, or faster, than  any of the other brands freerace/slalom setups. We had no problem to keep up with the JP Super Sport and JP Slalom with NeilPryde riggs. Fully powered the half wind and upwind performance was very impressive as well as the performance when we were over powered. In overpowered conditions the e-type breathes very nicely letting you go safe even though other sails probably would have put you into deep water.

We wouldn’t say that we have developed a full-on love story with the North Sails but we definitely feel that we have something cooking and as the PRO Center guys said, it’s all about your personal preferences. We agree! 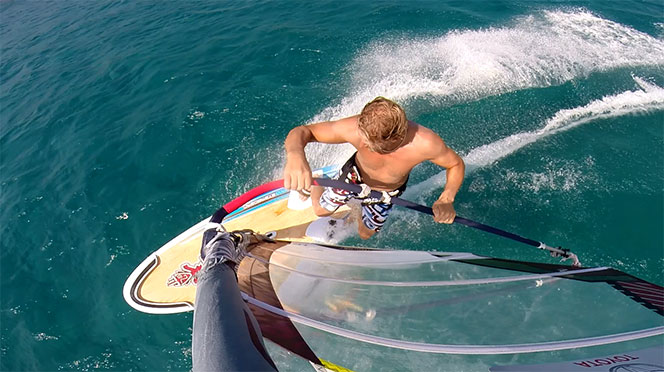 It’s no coincidence that Jem Hall and Guy Cribb holds Prasonisi as one of the best flat water windsurfing spots the globe can offer. Read our article about the freeride windsurfing heaven Prasonisi – Rhodos – Greece. We are guiding you through where to stay as well as which options you have regarding windsurfing board rental and last but not least – cash flow planning i.e. Is it possible to pay with card?
>> Read our article – Prasonisi the Freeride and Freerace heaven